Create an Account - Increase your productivity, customize your experience, and engage in information you care about.

Victor is a six-mile square township, peacefully and scenically situated in the northwest corner of Ontario County, nestled among the glacially formed rolling hills. The land's heritage dates back to its first inhabitants, the Seneca Indians.

Boughton Hill is a crossroads today, but during the 17th century it was the site of the Seneca Nation's principal village, Gannagaro. The Senecas, part of the Iroquois Confederacy, guarded the Haudenausanee from western invasion, and thus they were called "Keepers of the Western Door."

In 1687, the Marquis Denonville and his French army invaded the Seneca territory. On July 13, 1687, a battle was fought near the present village of Victor. The Seneca land in Victor was never again populated as a Seneca village. Today the location is Ganondagan State Historic Site.

Laying fallow until after the Revolutionary War, the Town of Victor was purchased from Oliver Phelps and Nathaniel Gorham for 20 cents an acre by Enos Boughton in 1788. Other families soon followed from Stockbridge, Massachusetts. A village was planned at the Boughton Hill crossroads. Acreage was set aside for a cemetery, school, and a village square. It was named Boughton Town.

In 1812, the land was set apart from Bloomfield and named Victor in honor of Claudius Victor Boughton, a hero in the War of 1812. Other settlers from New England followed and agriculture became the town's most important industry.

Eventually Boughton Hill lost its popularity to the valley below, and Victor, the village, began to prosper. The main route from Rochester to Canandaigua passed through the valley (the present site of the Village of Victor) and lead to the natural shift. Incorporation of the village took place in 1879.

As the farming community grew, industry also began to flourish. East Victor (also known as Scudderville) and Fishers were the early industrial centers of the town because the waters of Mud and Fish creeks could be diverted to power mills and factories more easily than the weak flow of the Village of Victor's Great Brook.

Finally, Victor became a prominent manufacturing center with such significant industries as the Wilcox-Johnson Tank Company, the Victor Preserving Company, and Locke Insulators. Fred Locke of Locke Insulators invented the porcelain insulator and he invented a low expansion glass material, which Corning Glass later marketed as Flameware, one of its Pyrex ovenware lines.

With the ground breaking on October 25, 1946, for an expanse of the New York State Thruway, Victor became part of suburban growth. In 1971, Eastview Mall was built and since that time high-tech industries, manufacturing companies, small businesses, and another mall have found Victor an attractive location.

A copy of the new book "Victor, NY: Centennial to Bicentennial," by Babette Mann Huber, is available through the Town Clerk's Office. Copies of the books "A History of Victor, NY" and "Images of America: Victor, NY" are also available. A driving tour of historic Victor is outlined in a booklet prepared by Town Historian Babette Huber. 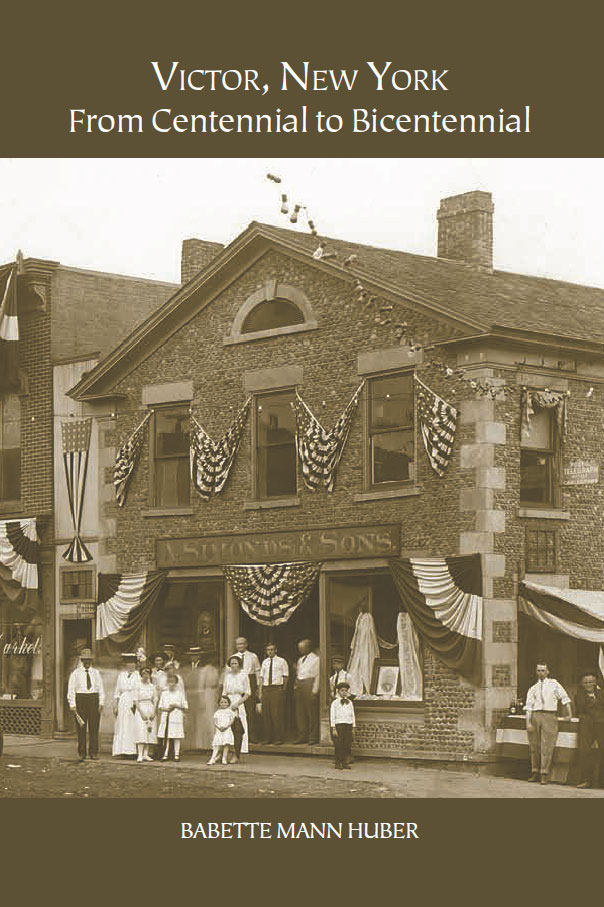